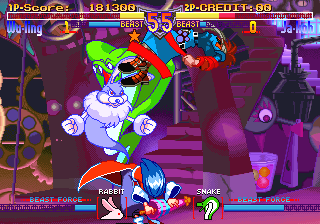 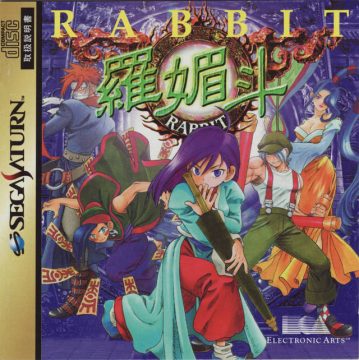 Many publishers and developers attempted to cash in on the fighting game boom thanks to Street Fighter II. But generally, it’s titles from Capcom and SNK that have survived in public consciousness, at least as far as Japanese companies. And yet there were a few stragglers from unknown companies that went largely unnoticed – one such of these games is Rabbit, a solid 2D fighter developed by a company called Aorn, who seemed to have inherited a few staff members from SNK and Atlus but otherwise didn’t stick around for very long. 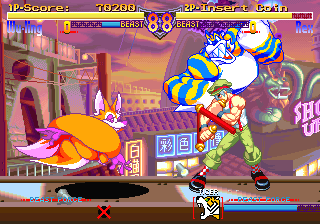 Rabbit has a strong Asian influence, particularly from China – the title is written using ateji (kanji meant for sound rather than meaning), which makes the logo appear to be Chinese, and nearly all of the characters have Chinese names. It’s also brightly comical, with a unique roster of characters, including purple haired assassin Wu-Ling who attacks with an umbrella; Hou-en, a hulking jiangshi; and Little Eddy, who resembles a sort of gigantic baby version of Elvis.

But the central gimmick is that every character has a “beast god”, which is an animal spirit that can be summoned to fight alongside them. The heroine, Wu-ling, has a rabbit as a beat god, which is seemingly where the game gets its title from. Other animal companions include a hawk, a tiger, a fox, a snake, a bull, a wolf, and a boar. The game is already rather bright, but these creatures add an extra level of comedy – some of the characters, like Hou-en’s wolf and Yu-lan’s sexy fox looks like they could’ve stepped out of a Tex Avery or Warner Bros. cartoon. Additionally, when playing in single player mode, you steal the beast god from defeated opponents, which can then be called upon for use as super moves in subsequent fights. The concept is extremely similar to the stands from the famous manga Jojo’s Bizarre Adventure – indeed, Capcom’s tie-in fighter, released a year after Rabbit in 1998, works very similarly. 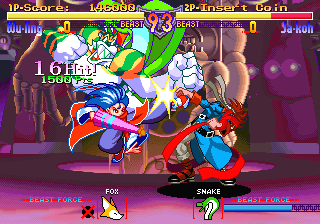 Rabbit was initially intended to be distributed by Jaleco, but it’s unclear if the arcade version was ever officially released. It did end up on the Saturn, published by Electronic Arts. By default, though, the screen setting zoom is messed up – make sure to head into the options to set it to 100%, so you can appreciate the beautiful, finely animated sprite artwork.