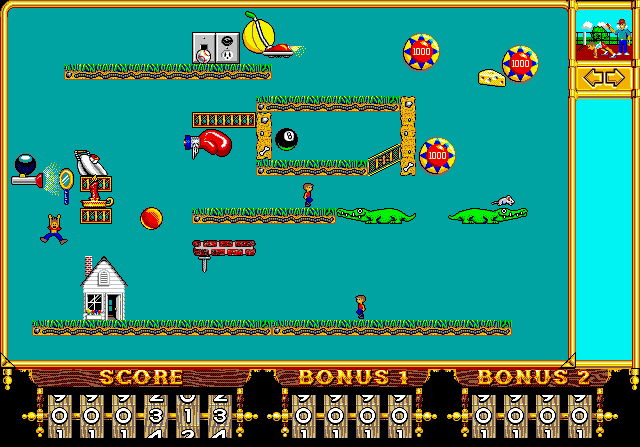 Back before Sierra became whatever ungodly combination of corporations they are now, Sierra made a ton of games. Mostly well-liked adventure games, like the Quest series, but every once in a while, they’d do something new, like publishing Japanese PC games for the American market. Sometimes, they’d try things besides adventure games, too. They published a few strategy and simulation titles, and occasionally an action game. One of these ventures, developed by a company called Dynamix who were known for games like Rise of the Dragon, ended up being pretty successful.

Ever seen a movie or a cartoon where a character makes a huge, incredibly complicated contraption with lots of little parts to do some simple task? That idea came from a cartoonist from the early to mid 1900s named Rube Goldberg, and The Incredible Machine (“TIM“) games are pretty much an interactive homage to him and his cartoons.

The goal of every Incredible Machine game is pretty simple. You’re given certain objects, which you have to rotate, place and sometimes program to complete a series of events to solve the level. Fail, and all you have to do is stop the puzzle and work on it some more. You don’t have any time or retry limits, unlike a lot of puzzle games that just don’t work with those kinds of mechanics.

Every level has a different goal for you to complete. Some are about getting an object to a certain point on the screen, like putting a basketball through a hoop, and others are about destroying or activating them, like turning on a can opener so a cat can get the food in it. You’re given all kinds of things to use, like balloons, buckets, ropes and pulleys, and even a few animals. And to mix things up, occasionally the gravity and air pressure will be altered, too.

Aside from a few annoyances that wouldn’t be ironed out until later games in the series, the first game plays pretty much like the rest of the games. There’s only 65 puzzles in the game, not counting 22 skippable tutorials. Your progress is kept through a password like ‘fish’ or ‘calculator’, instead of being saved to disk like most computer games. There’s also a sandbox mode called ‘Freeform Machine’, which gives you an unlimited supply of parts to place on the field to see what happens. You can save and load your creations, but there’s no way to give them a winning condition, so it’s only a curiosity.

If you can get past those few nitpicks, it’s just as good as the newer games in the series. They never remade the puzzles in this game and its ‘expansion’, so if the password system and running the game from DOS doeesn’t bother you, it’ll probably just as good of a starting point as any other in the series. 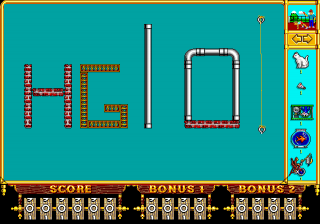 The DOS version is the weakest of the versions, with Adlib quality music. The Macintosh version looks about the same, and doesn’t have any real difference besides sounding better. The 3DO port is actually quite a bit different from the other ports. The graphics have changed and are lower resolution, and you have to scroll the screen in some of the puzzles to see everything, which is a pain. The puzzle set is a mix between the original DOS version and its expansion, with a CD soundtrack and voice acted goals. Controlling the game is a lot harder to do with a controller than a mouse, and the cursor’s hard to move around. You also have to deal with the CD loading times. It’s an OK port, but it’d be a lot better if the controls were smoothers and without the scrolling. 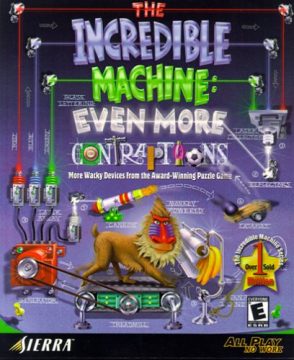 TEMIM is more of an expansion pack to the original TIM than than a full-fledged sequel. It has the same graphics as nitpicks as the original did, only now there’s 150 brand-new puzzles to solve. There are a few new parts this time around though, including a character that’s the focus of a lot of the new puzzles, Mel Schlemming. True to his name, he’ll usually walk forward mindlessly until he bumps into a wall or falls off the screen. Most of the time, you’ll try to clear a path for him so he can reach his house safely, but sometimes they’ll want you to just blow him off the screen, or feed him to an alligator. Once again, the differences between versions are pretty minor, although with a sound card, the DOS version sounds much, much better. The CD version for Windows also has a CD soundtrack.