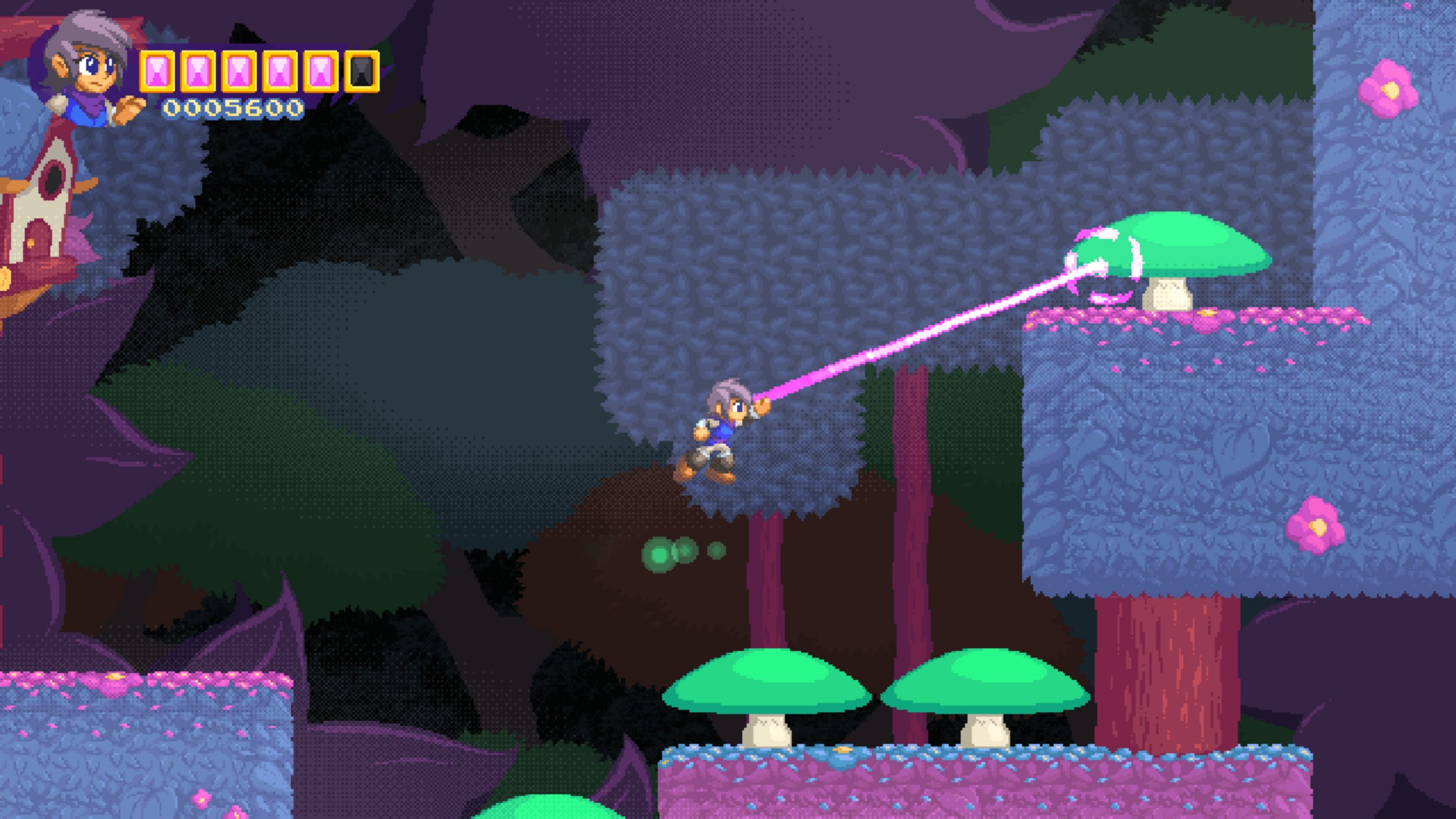 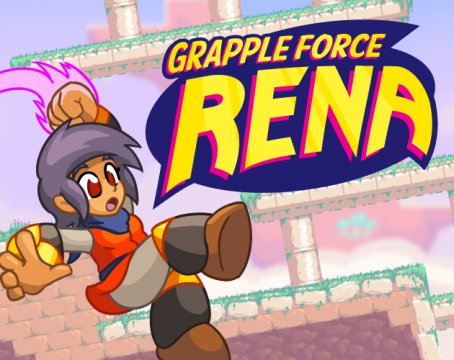 There just seems to be something special about grappling hook mechanics that many people really like. Being able to grab onto ceilings and pull oneself up, then swing across ceilings to reach places otherwise unreachable just adds that little something extra to a platformer. The mobility they add and the stunts they make possible can be so much fun that they might make one wonder why more games don’t employ this feature.

There have been games based around grappling in the past, such as the Bionic Commando series. Some of these games were limited by technology, such as only being able to grapple at a 45 degree angle due to lack of analog controls. Some were limited by imagination, such as only using a grappling hook on ledges and ceilings. But games have evolved since then, and now much more can be done with the concept. 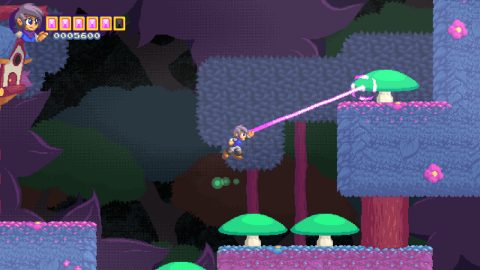 Grapple Force Rena takes the idea of using a grappling beam and builds nearly its entire gameplay around it. There are only four actions Rena can consistently do – walk, jump, grapple and throw. And a lot of mileage is made out of these verbs.

Rena is a girl living in a town in a medieval/steampunk-esque world. She wants to be a hero someday, and she gets her chance when robots known as hollow soldiers suddenly attack her town. Armed only with a grapple beam she happened to discover when she was younger, Rena sets forth to put that beam to good use.

And there are many uses for it. The grappling beam can pull Rena towards ceilings and walls or even floors if aimed downwards. It can grab enemies and objects and pull them towards Rena so she can carry and throw them. It can grab onto vehicles and pull Rena onto them so she can ride them. She can even use it to scale walls. 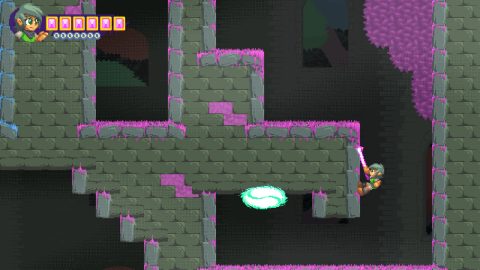 The controls are a big part of what makes the game tick. The beam can be aimed in any direction with either mouse and keyboard control in the PC version (moving the mouse cursor and clicking to fire the beam), or either analog stick on a controller with absolute precision. The sheer precision of the controls makes the beam easy to aim exactly, giving more freedom on where to position Rena while firing it out. It can be aimed with the movement stick, or independently with the second stick. There are multiple control schemes that can be switched between on the fly to try to make everyone comfortable with the game, and there’s even an optional auto aim which can be enabled.

On the other hand, playing with the digital pad forces 45 degree angles into the game, which in turn forces players to position Rena in exactly the right spot when grappling diagonally. Experimenting with the different types of controls shows why analog controls are so vital, as there simply is no beating the freedom of full range aim.

The other part of what makes the game work is how heavily it’s built around grappling and using that single verb to either do many other things, or as a lead-in to those things. For a good chunk of the game, nearly every level is introducing some new gimmick. 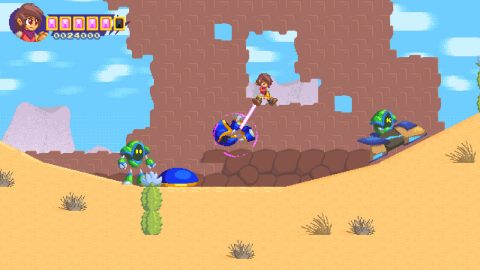 One level takes place inside something similar to a giant pinball machine, and grappling the wall or even ground helps stop the momentum caused by being knocked around by bumpers. Another level introduces speeder bikes. How to use them? Use the grapple beam to grab the enemy riding them, and toss out the enemy. Then grapple the bike to pull yourself right into the driver’s seat. When finished, just throw the bike. One level introduces a flying ally who lets you ride on his back, which is done simply by grappling him.

Enemies are fought primarily by grappling and throwing them, or grappling their projectiles and throwing them back. Many of the enemies themselves have gimmicks, too. One flying enemy with propellers can be grappled and then carried to jump extra high. Another enemy wields a shield that can be ripped from its hands and then carried overhead to block projectiles from above. Another enemy hangs from ceilings and swings back and forth, and can be grappled onto while it’s swinging. 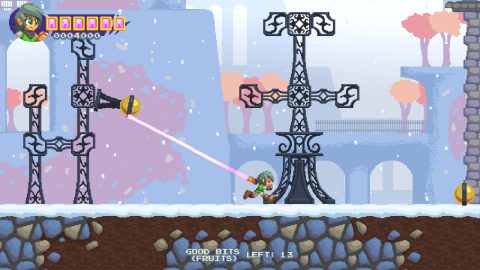 Levels even have some variety to their mission objectives. Usually, it’s simply reaching the end. But some levels require players to hunt down and beat every hollow soldier, or collect a particular object and gather them together in one spot. Another level requires Rena to collect tokens within a time limit that has a forgiving penalty.

Some levels even have creative twists on their objects. There’s an escort mission which mitigates the frustration many people tend to have with escort missions by making the escort invulnerable, able to both be carried around and thrown like an item, and even fight enemies on his own. Other games with escort missions, take note! Another level which involves weighing down a switch with heavy objects implies players need to use crystals to do so, but it can also be weighed down with shields, spiked balls, and even enemies. Figuring that out saves time hunting for the crystals.

This variety in objectives mixes with the variety in obstacle and enemy types to ensure that players are always encountering something new, or at least, a new variant on something previously seen. 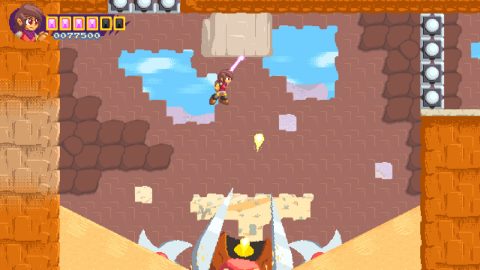 Boss fights often introduce gimmicks as well, such as an antlion with a rock right above its head. The boss fight pretty much consists of grappling the rock to gradually pull it down, while swinging to dodge the boss’s attacks. Another boss fight against a giant fan has large gusts of air that can be countered by grappling onto the ceiling for protection. The final boss introduces a whole bunch of new attack types that’ll make players think differently about how to react to them.

Grapple Force Rena is pretty short at only 30 levels that individually take 3-10 minutes to complete, not including cutscenes, and the game is also fairly easy for experienced gamers once they master the grappling mechanics.

Every single attack takes off exactly one hit and no more. Gimmicks and boss attack patterns are easy to learn even if some may take a few tries. Falling in pits carries a minimal penalty in the few levels that contain pits. The missions requiring you to fight all the enemies show an arrow onscreen pointing to the nearest enemy so you don’t waste time getting lost. Missions requiring you to collect objects often contain more objects than you need, in case you find some of them too difficult to get. Even the mission where players are required to collect tokens within a time limit carries a minimal penalty for missing the time limit – a random, weak enemy spawns somewhere, and the token counter decreases anyway. Another level features a time limit with an instant death penalty for failing, but the limit itself is very generous. 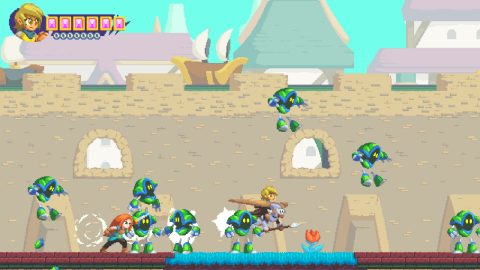 The things more likely to catch players off guard are two levels that require playing as a different character due to story reasons (fortunately, that character’s moves are visually explained on the pause screen) and the sudden difficulty spike for the final boss.

If needed, there’s an assist mode hidden in the Extras menu to do things like lower gameplay speed, have regenerating or even infinite health, and even skip levels. There’s also an auto aim feature that can be enabled in the main options menu, though there’s no good reason to divide up the assistance features like this. This game feels like it was designed to try to give everyone a fair chance at completing it.

On a parental note, the game is also pretty family-friendly. The hollow soldiers who get blown up are mere robots, human bosses don’t die but are instead defeated, non-robot enemies simply get knocked out or run away when defeated, and Rena’s death animation is simply becoming dizzy and lying down. One evil character in the story does have an ambiguous fate, however. 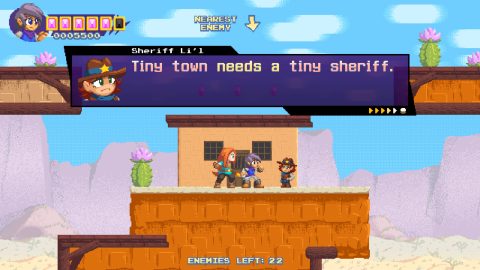 Speaking of the story, it’s pretty light-hearted, but has a surprising number of twists and turns and features themes as varied as blackmail, corruption and even religion and questioning faith. It does, however, leave some things unexplained and some threads hanging. The actual telling of the story is done with mostly light, humorous dialog, with many silly NPCs. As is so often the case with games like this, the humor is toned down when things get more serious in the story, before it goes back to being silly again in the playable epilogue. The game just has a lot of personality, which even extends to the animated character portraits next to life meters during gameplay, and how they change expressions based on the situation.

A technical issue with the PC version that needs addressing: the complete lack of dead zone on the analog stick in the game’s menus. The PC version supports keyboard and mouse controls as well as controller controls, but the controller’s analog stick is very twitchy when navigating menus, where even the tiniest accidental nudge will result in making the wrong choice. During gameplay, the exactness of the controls actually works to the game’s favor, by allowing incredibly precise aim, and there are no dead zone issues with movement. But if playing the PC version with a controller, just know that the menus are best navigated with the digital pad, while the analog stick works excellently in gameplay. 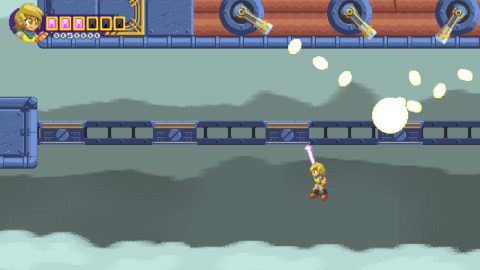 While Grapple Force Rena is short, it does have some extras. Cassette tapes are hidden in levels to be collected as an added challenge, and completing the game once earns the ability to change Rena’s colors, as well as a speedrun mode.

The presentation is very retro in a specific way, with the visual style, sound effects and music instrumentation patterned after the Genesis/Megadrive. It seems fitting that this nearly solo-developed game was published by GalaxyTrail, the makers of Freedom Planet, another game which was Genesis/Megadrive-inspired but had production values more in line with the Sega Saturn. At the same time, this game couldn’t have been done on an actual console from the early 1990s for one simple reason: its analog control. The analog control is what makes the grappling mechanics as precise as they are, and the game just wouldn’t work nearly as well without them. 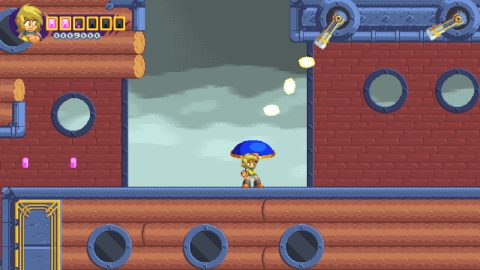 Grapple Force Rena may be short, but it accomplishes what many of the games seen as retro classics also do – take some simple play mechanics and build a game around them through variety. At no point does Rena upgrade her abilities or earn new skills as might be expected from a modern game, and yet the game continually puts out new ideas and new twists on previous ideas to keep things fresh. The result is a game that continually moves forwards and ends before it has a chance to get boring. Maybe it’s a little too short, but it packs a good amount of variety into its brief playtime.

Songs for a Hero
Night mode