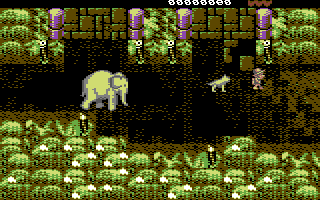 Darkness is another new title genuinely programmed for the Commodore 64 and published in disk, tape and even cartridge format by Psytronic/RGCD. The game hold absolutely no pretenses of originality – the story is the typical Indiana Jones / damsel-in-distress tale of an adventurer couple in 1937, whose plane crashes deep within the African jungle. When the man comes to, his girl is gone, so of course he has to find and rescue her. The quest takes the form of a typical top-down action adventure.

This is no Legend of Zelda, though. The mechanics are simplistic, and all the adventurer can do is walk around, shoot at attacking jungle animals and interact with treasure chests and doors. The only items found within are health upgrades and a variety of colored keys for specific doors. The one note Darkness takes from Zelda is the grass, which can be cut (or in this case, actually, shot) down to sometimes yield healing items or temporary invincibility. 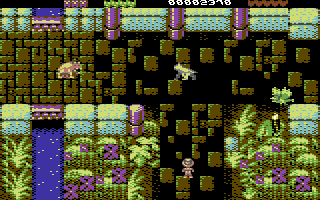 Darkness is not the hardest game to begin with, though. Whenever the hero enters a new screen, enemies take a few seconds to spawn from visible clouds, so it’s easy to come up with a way through before they even start moving. Unless it’s necessary to get all across to the opposite site, it’s even possible to get by without a fight most of the time. If the spawn locations seem unfavorable, all the player has to do is go back to the previous screen and re-enter for a new random distribution of attackers. There’s a variety of animals, from birds to boars and spiders, but they don’t behave all that differently and always storm frontally towards the protagonist. The huge elephants are the only who deviate from that pattern, and can actually transition between screens, but their behavior is equally predictable.

For a game that is no bigger than a few kilobytes – it fits entirely into the Commodore 64’s memory, thus requiring no load times in between – there is some decent variety in environments. Wilderness dominates, but there are also areas with ancient roads and bridges, and a section of dark jungle. Eventually, the explorer happens upon ancient ruins that look like dungeons, but are rather tiny. All in all the complete maze consists of 100 screens, which might have sounded like a lot in the C64’s heyday, but nowadays it’s painfully obvious that it doesn’t amount to much. Once accustomed to the mechanics, the game can easily be beaten within an hour or two, and since the quest is always the same, there’s not much incentive to have a go at it again, aside of the promise of a better (short) ending when clearing the game faster. At the end does await a boss who’s very difficulty, but only because he can take a seemingly endless number of hits.

Even though the game may be lacking in substance, it’s a solid game with smooth controls, and a fun little distraction for the short time it lasts. The physical copies are best left for the most ardent of Commodore aficionados. Fortunately Darkness is also sold as a digital image for download, which comes quite cheap and can be run in emulators or, given the right equipment – copied to any C64 storage medium.